On November 7, 2020, Presence Point completed the facilitation of a Shepherding Conference for 76 Sudanese refugees and local Egyptians near Cairo, Egypt. With materials translated into Arabic and participants who spoke both Arabic and a variety of Sudanese dialects, the interpreters provided were remarkable! But … but the Father’s faithfulness and the Holy Interpreter, Himself, were the highlights of the four days.

The majority of the participants hoped to engage what they learned with those from their refugee community in Egypt and in their home country of South Sudan, but they never anticipated all that God would show them and all they would learn when they began to discover the Biblically based leadership model of shepherding!

The module on forgiveness, for example, led to a 30-minute time of silence and solitude. The men and women sat alone quietly at a variety of locations around the conference center while asking the Father to search their hearts for where they needed to forgive former shepherds in their past. It was eerily quiet on the 20-acre property until suddenly and, without warning, two women began wailing, screaming, and weeping so loudly a number of leaders ran to their aid. We were astounded to learn they were grieving their experiences with former shepherds in their lives who had wounded them deeply. Some of the attendees are dealing with a long-standing history of violence that had caused the death of loved ones and displacement from their homes. This was a remarkably impactful time.

After powerful testimonies by the attendees of their time in silence, two Egyptian leaders of 4G3 and the Middle East Leadership Training Institute formally apologized to the Sudanese on behalf of their country, as Egyptians generally treat the refugees with great disdain, spitting on them, throwing rocks at them, and treating them unjustly. The Sudanese in attendance could not believe they were hearing both an apology and a request for forgiveness. Ultimately, this couple offered to wash the feet of a Sudanese woman and man to humbly demonstrate their love and respect for these people. Deep lament and crying could be heard throughout the room as Egyptian leaders knelt before the Sudanese, gently washing and drying their feet, and hugging them with profound sincerity. The grief was palpable. The moment surreal. Those privileged to be in the room were standing on sacred ground.

This led to a time of discussion regarding whether forgiveness was necessary between tribal representatives in attendance. The leaders learned that although the attendees didn’t believe that step was necessary between the participants, they asked if they could take time to pray together and cry out to The Good Shepherd on behalf of their family members who didn’t know Jesus.

Believe it or not, all of this was simply a foundation for learning to shepherd as God intended. Individuals and team time in Scripture passages from Ezekiel, Jeremiah, Isaiah, Zechariah, the Psalms and the Gospel of John led the participants identifying detailed behaviors of a Godly shepherd. In addition, their intention to apply what they found was inspiring.

Declarations of commitment to shepherd well and testimonials about our time together noted that a number of the participants felt this was the most engaging and practical conference they had ever attended. Before leaving the conference, 14 attendees committed to multiplying the message in their home country and in the Cairo area and in fact practiced facilitating portions of the material before the conference ended. Heading back to the U.S. after two additional days of training MELTI staff in the areas of Shepherding Peers at Work and Shepherding in Crisis, the Presence Point team was grateful to The Good Shepherd for all that He accomplished in this partnership with 4G3! All praise be to our God most high! 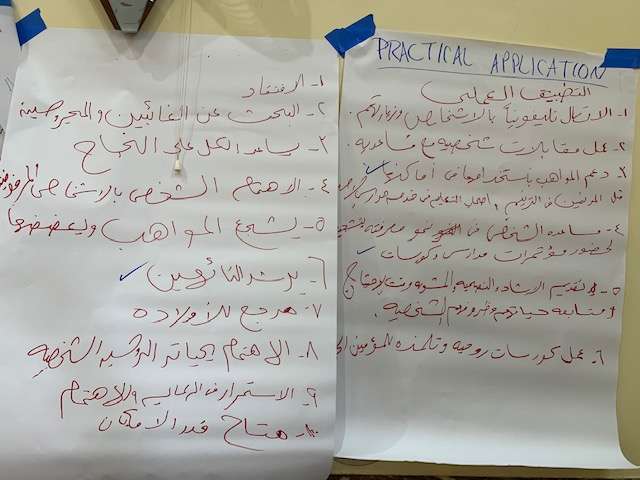 The Fall Newsletter Is Now Available!

The Spring Newsletter is Now Available!

The Winter Newsletter is now available!

The Fall 2021 Newsletter is now available!

The Summer 2021 Newsletter is now available!